By 1900, New York City and the United States were undergoing waves of dramatic, traumatic change. Industrialization, Reconstruction and a surge of immigrants from across the globe were remaking every aspect of life, from transportation to education, leisure, labor, race relations and the status of women. One response to the dislocations and turmoil of this era was the reform efforts that we now classify as the “Progressive Movement.”


Grace Aguilar did not participate in this movement. She had been dead for nearly sixty years, laid low by illness at the age of 31 after a short but prolific life. She was not an American and never traveled to the U.S. Her name, however, was evoked across Greater New York in social clubs and lodges, literature, editorials and religious mediations, and in the explosive growth of a small ecosystem of libraries stretching from lower Manhattan to the newly constructed tenements around East 110th Street, what is now East Harlem or El Barrio. The lesson described below began from questioning the apparent lack of connection between this an obscure British writer of Sephardic Jewish descent and one of the quirkiest library buildings in the New York Public Library system—the Aguilar Library. Why is a library branch building in East Harlem named after a British woman who never even visited the United States? 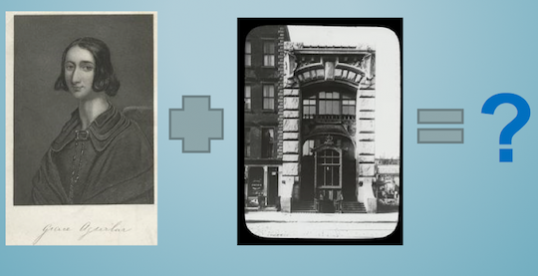 Posted by Stephanie L. Gross, Librarian at 9:16 AM