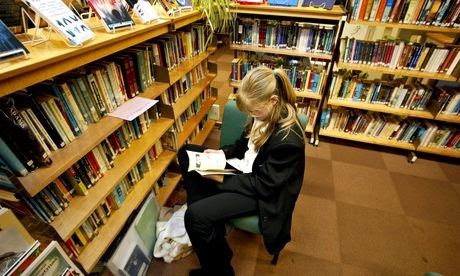 'Every child has the
right to read' … a Year 10 pupil reading in East Barnet school library.
Photograph: Graham Turner for the Guardian


Children's laureate Malorie Blackman, the poets Roger McGough and Michael Rosen, former poet laureate Andrew Motion
and biographer Michael Holroyd are among scores of authors,
illustrators and librarians who are pressing the government to take
"urgent" action to make sure all schools have a good school library.

In the wake of the report last week from the Libraries All Party Parliamentary Group,
which asserted that it was "vital" that all schools "have a good
library to ensure children develop essential literacy and digital
literacy skills in order to fulfil their potential", more than 200
authors have written to the Guardian calling on the Department for
Education to "act immediately on the report's conclusions". These
include instructing Ofsted to look at libraries when inspecting schools, and collecting data on the number of school libraries and librarians. Read more...

Posted by Stephanie L. Gross, Librarian at 9:48 AM