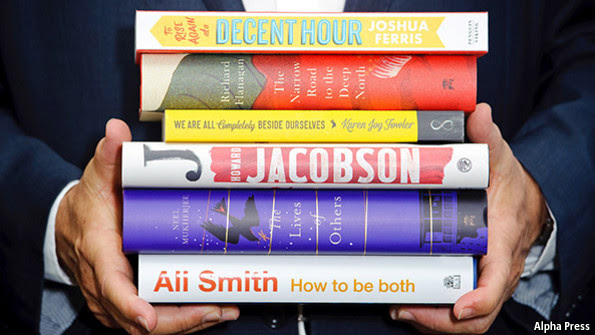 THIS year's Man Booker Prize was awarded on October 14th to
"The Narrow Road to the Deep North", Richard Flanagan's harrowing tale
of Australian prisoners of war in Burma. Like most of the titles
nominated for the prize, Mr Flanagan's work is so far available only in
hardback format in most markets. At 22cm (9 inches) long, 464 pages deep
and weighing in at more than half a kilogram, it isn't a convenient
thing to lug around. Nor is it cheap, at £16.99 in Britain (or $26.95 in
America). A lighter, cheaper paperback edition will be published next
year in both countries. But why do books come out in heavy, expensive
hardback format first?

The first books were bound with strong,
rigid covers. Small print runs made them expensive luxuries. The
paperback was pioneered in the 19th century and became popular in
continental Europe. It took off in Britain and America in the 1930s,
when publishers such as Penguin and New American Library began
mass-producing cheap but well-designed reproductions of older texts,
aimed at a new generation of readers who could not afford hardbacks.
During the second world war, interest in reading as a pastime increased
just as paper shortages demanded more efficient methods of printing. The
paperback was the solution.

But titles which are expected to sell
well are often still printed first in hardback. Known as “windowing”,
this sales strategy is also used in the film industry, where titles are
released in the cinema several months before being sold on DVD. Like
cinema tickets, hardcover books generate more profit per unit than
paperbacks. And just as cinephiles like to see films on the big screen,
collectors enjoy the hardback's premium quality. “The Narrow Road to the
Deep North” has bright red endpapers; others sport embossed covers or
come with bookmarks. Hardbacks' durability means they are also popular
with libraries. And they hold a certain snob value, too: literary
editors traditionally don’t review paperbacks. Once hardback sales have
slowed, a paperback edition is released. Printed at a higher volume than
the hardback, it usually sells in greater numbers, but at lower
margins. Some publishers time their hardback editions to come out just
before Christmas, eyeing the gift market, before publishing the
paperback edition in time for the summer holidays. Read more...

Posted by Stephanie L. Gross, Librarian at 9:34 AM