In Response to Critics, a New Renovation Plan Will Focus on Books, not Atriums

The New York Public Library, responding to outcry over its plans to demolish century-old book stacks, will this fall unveil a new design that preserves a significant portion of them, its president, Anthony Marx, said Tuesday.

The library disclosed its plans in response to questions from The Wall Street Journal about alternatives it had considered to the $300 million renovation, which has sparked two lawsuits brought by scholars and preservationists, including a Pulitzer Prize-winning historian, aiming to block the stacks' destruction.

Those alternatives, since scrapped, included mothballing the stacks or restoring and opening them to researchers as the Bibliothèque Nationale de France is doing, according to documents obtained from the State Historic Preservation Office through a public-records request. Until now, the renovation plan for the New York Public Library's landmark Fifth Avenue building has called for dismantling the stacks and replacing them with a new circulating library designed by British architect Norman Foster. 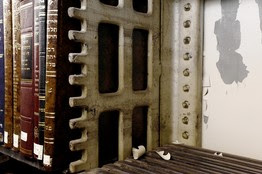 Noah Rabinowitz for The Wall Street Journal
Stacks in New York before they were emptied.

The library still intends to build a new circulating library in the 80,000-square-foot space under the Rose Main Reading Room. But in contrast to renderings released in December, which envisioned a vast atrium, the new design will incorporate the stacks as "a prominent feature," Mr. Marx said. They would hold the circulating library's books and be configured in a way that allows patrons to "see and experience" what the stacks were like as originally conceived by the building's architects, Carrère and Hastings, he said.

Reading rooms will be emphasized, "rather than atriums," Mr. Marx said. The design is not yet complete, and the library has not yet calculated its cost, he said. Read more...