Essential Anthologies: Poetry, Essays, and Letters in the Age of Trump


Sad. Huge. Sick. Bigly. Unproud. Covfefe. Despite the fact that President Trump handles the English language like a three-year-old wearing frozen mittens, his words, both spoken and tweeted, have proved alarmingly successful tools of bullying, misdirection, and blame-shifting, enabling him to shape reality into an alternate version in which he is infallible and his critics are – another favorite – pathetic. As a literary critic wrote in The Guardian recently, Trump has used (or abused) the English language to “undermine the notion of objective truth more successfully than most novelists can dream of doing.”

What can you do when your enemy uses your weapon against you? Starting a few years ago, writers around the world began publishing essays, speeches, stories, and even, in a few prescient cases, novels warning of what awaited us were Trump to be elected. He was, and the weeks that followed were marked by reaction pieces by those same writers and others, many of them simply asking, what the hell just happened? Some two hundred-odd days later, Trump remains in office, and writers keep fighting his regime with the most powerful weapon at their disposal, trusting, or hoping, in its essential efficacy.

The fact that writers keep writing, keep putting their faith in words to accurately describe reality, keep believing that there are still readers out there who will be moved, possibly even changed, by what they’ve written, is in some sense the most audacious act of protest against this singularly linguistically hostile president. So many writers are feeling moved to record and resist not just Trump’s abuses of Americans’ civil liberties but his more basic lack of respect for human decency and civilized discourse, that we are now seeing several anthologies of writers responding to the Trump regime. 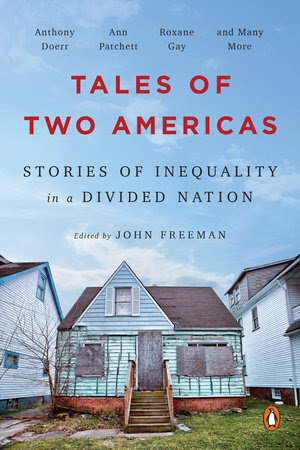 Stories of Inequality in a Divided Nation